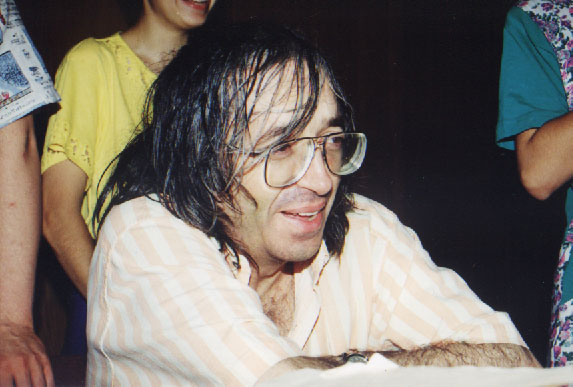 Gregorian Bivolaru was born on 12 March 1952 in Tartasesti, Romania. From a young age he manifested an intense aspiration to knowledge and contemplation. He discovered spontaneously since childhood that he knew and mastered a lot of yoga techniques which he was able to put into practice efficiently and get quick and remarkable results. Practising attentively, systematically and perseveringly these yoga techniques, Gregorian Bivolaru managed to get very soon exceptional skills, some of which could be considered paranormal. Along his complex yogic experiences, Gregorian Bivolaru deepened the oriental spiritual teachings, the fundamental texts, and assimilated many of the experiences of great contemporary sages such as Sri Ramakrishna, Swami Shivananda, Paramahamsa Yogananda, putting into practice successfully everything he studied with enthusiasm about yoga and authentic oriental spirituality.

In the ‘70s, during communist dictatorship, Gregorian Bivolaru started to teach yoga in Bucharest and created thus a broad and enthusiastic opening towards yoga practice in Romania. He continued to teach yoga between 1980-1990, fully aware of the risks he exposed himself and constantly monitored, questioned and threatened by the Secret Police (”Securitate”), since the communist regime had banned yoga and any spiritual oriental practice. After the Revolution of 1989 Gregorian Bivolaru, together with 21 yoga practitioners, set up what is called MISA (Movement for Spiritual Integration into the Absolute), the biggest esoteric yoga school in Romania and Europe.

As a spiritual mentor, Gregorian Bivolaru continued his activity of structuring, guiding and developing MISA Esoteric Yoga School which counts about 40,000 practitioners and sympathisers who attend the classes of this school in Romania and in other 33 countries, where there are centres of yoga who follow the same curriculum and methodology as MISA.

Apart from his spiritual activity as a yoga teacher, Gregorian Bivolaru published hundreds of articles about yoga, spirituality, oriental philosophy, Ayurveda, parapsychology, and has written more than 100 books both about yoga, spirituality, and natural healing, as well as about social and economic realities in today’s world and about inventions and revolutionary technologies which are being kept secret from the general public.

An active supporter of a new spiritual paradigm able to help the modern man find the balance between millenary wisdom and contemporary science, Gregorian Bivolaru has become a pioneer of a new wave of spiritual awakening of this planet. Through his writings as well as methods that are easily accessible to anyone (amongst which the Art of Blessing or the Effect of ”lightning rod” of the Godly will), Gregorian Bivolaru was and still is a pioneer in many fields at the border of science and spirituality, building a bridge between these two traditions which have been disconnected for hundreds of years.

His revolutionary ideas have placed the Romanian yoga school at the forefront of world spirituality. Gregorian Bivolaru is the one who promoted new concepts such as Occult resonance as a universal principle long before it started to be discussed in contemporary spiritual circles.

Furthermore, he reintroduced in the West the idea of sexual amorous continence, an ancient self-discipline which allows modern man to fully enjoy their innate potential which is being otherwise wasted due to lack of control over the sexual energies.

He also developed the concept of Occult offering, which is also a universal law that can be put into practice by anyone who wishes to experience the fulfilment given by the act of offering something to the others, benefitting at the same time from the good they offer in a detached and altruistic way.

Through his whole activity, his revelations and actions, Gregorian Bivolaru irritated some people, inspired others, but never ceased to guide, with modesty and in a permanent state of Godly channel, all those who are thirsty of authentic spirituality and who aspire to perfection.