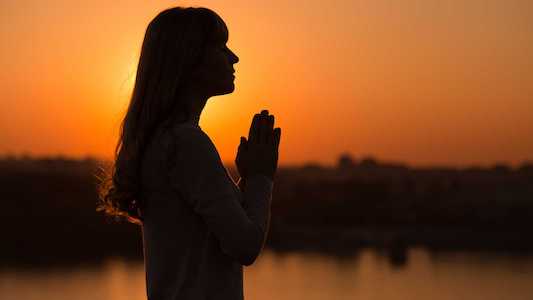 I would like to share with you the experience I had in this spiral meditation. When I came here, I remember it was right during a testimony that was being done at that time, a colleague offered me the headphones to hear that testimony and I remember that colleague who was giving the testimony said that after this experience God told him to share. It is the same for me.

The spiral was very intense, I could feel the energies building up. Just before the consecration I began to perceive the beneficial energies and the subtle energy field and at that moment I knew that these energies would support us. When the music started I began to pray and I continued to pray throughout this spiral, this event, continuously, without stopping, at first in English. During the camp I was confronted with certain states, I realized that I was denying my origin, my roots, because of certain unpleasant experiences from previous lives, and during the spiral, while I was praying, I realized that it was important to overcome these aspects, to overcome them, praying in German. Since I came to this school I have performed the consecrations only in English, and during this time I struggled with the words, both in my mind and in my heart. And my prayer said: “Lord, please, if it is your will, help everyone who is here to overcome their sufferings and all the issues they are facing”, and with each song the state changed during the prayer.

At one point I was sad, because I realized that so many people were suffering and needed help, then I was full of gratitude, full of love, the state was in a constant transformation, and at one point I received help from those I was praying for and so I experienced a miracle. At times I experienced things through the other beings, they brought me to the point where I could experience something and perceive something, for example a memory, or a state, feelings, whatever they wanted to show me, and reciprocally. At one point it was the being on my left and I realised that in the way he was holding my hand and supporting me, God was giving me impulses and by following them I was entering a state where I felt purified at the level of Vishuddha Chakra. It seemed unusual, but we are all unusual in some way. I experienced various purifications at the level of Manipura Chakra as well. It also manifested physically, I would get into these poses, these postures, like doing an asana, but without actually doing the pose. God was bringing my body into certain resonances so that I could purify myself; sometimes He does that. It was also tiring, but I felt the support of God and the beings around me and I felt that this intense love of Shiva was healing me more, so each posture, so to speak, was bringing me to a zone where I could heal myself. Throughout the technique I felt how important it was to keep praying, and each time I completed a prayer, I felt God’s Grace and how certain aspects that should not be in my being, because they were not beneficial, were removed.

At one point I realized that the being to my left had in a previous life been my father. At that moment I had the feeling that I had the support of the father and of God the Father, that He loves us even if we don’t manifest ourselves as we should, and even this experience led me to a new purification. At some point I felt that there was nothing left that needed to be removed. I sensed a lot of inner strength and felt that He was using my being as a vessel to manifest this healing through me for others. In connection with my nitya, the 14th, the healing nitya, I felt how suddenly I was full of energy and I felt it transforming in a certain way, then I opened my eyes continuing to pray, to see those I was praying for, and then again I saw those entities, certain entities of light flying over our heads, taking care of us. I felt how He, God, was enabling me to project that healing energy in a telepathic way to the being in front of me and the prayer became for me as I manifested those words that appeared in my mind. At one point I closed my eyes again and continued to pray, then the purifications began again and the states continued to transform and so did the purifications. At first I was sitting in a somewhat head backwards position and felt like coughing. Every time I coughed I felt that I was being pulled back and then I was again guided by certain impulses that I perceived in the hand of my neighbour, of the being next to me, in a different position, and at one point I felt that I was in a posture that expressed humiliation. So each posture was charged with a different emotion, a different realization, a different awareness, and when I was getting tired, I felt this support again, I felt the support of Grieg, who was supporting me through the two men who were on my left and right. And at some point I realized that the prayer I was saying for others was manifesting for me, it was a miracle, God is amazing, it’s extraordinary! Even the way I was going to phrase the prayer was like hearing what He wanted me to say as a prayer.

After the meditation, when the part where we needed to internalize followed, an intense purification appeared in the abdominal area, I could feel how when I breathed something was released from the lower abdominal area and everyone could hear it. The day before I had opened a book, I had received signs that I should choose a book and open it to a certain page and read there a certain sentence that was related to something deeper, more profound. So the day before the event I did this and there was a passage about the woman’s abdominal area where it said that we should ask ourselves what fears and what tensions or stresses are there, that often it’s not only our emotions that are stored or held there, but also those of other generations and even of the whole society. When those sounds appeared in my lower abdominal area, which were very disturbing, I felt as if tensions that had been there for many years without being mine were being released for the first time. It was a continuous process, people were watching and at one point I felt again that I wanted to sit down, but those who were next to me all the time felt it telepathically. When the demons intervened and wanted to make me feel tired, or to put me down, I realised that I was able to manage to stand until the end, so again I felt supported and again I felt God pouring out His grace in waves, because both men next to me were supporting me. I could feel my throat area getting very hot, as if I had a fever, and I could feel my whole being, my whole system continuing to purify and I could feel those feelings of release. Then I went inward to do the gratitude meditation and when I was doing it, when I was saying the words in my mind, I was perceiving each one individually, and when I finished I just felt love!