A mystery foretold that something would happen 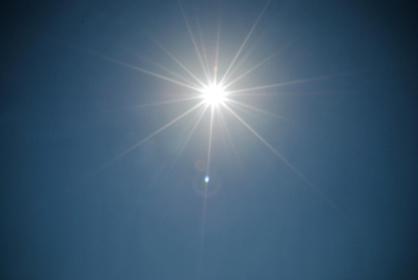 I wrote it down before, so I’ll read it to you now. On this day of September 2nd, before the actual manifestation of this exceptional healing event, I was in a state of centering, of inner peace, a state that helped me a lot during this exceptional event. Shortly before the beginning of the spiral meditation, the condition of the sky at that moment caught my attention, so to speak, namely a sky without spots, without clouds, of an enveloping stillness, a stillness full of a mystery that fascinated me, a mystery that foretold that something was going to happen, that something was in the air, a sky of a transparency that comforted my heart. I realized in my heart then that the state I was having it was reflected in the state emanating from the sky and vice versa. Then, lowering my gaze and attention to the crowd of people, colleagues around me, I began to perceive that I was surrounded by many souls and I realized that only my soul could feel in this way. This perception awakened in me a sense of humility, love, compassion and respect for all these souls who were there in the spiral with me.

The spiral meditation began and in a few seconds these states of respect, love, compassion, but also of gratitude and unity at the same time with all these souls here with me increased. I could not feel human beings, but simply souls, then I tried to pray to God, but spontaneously I realized that I could not pray to God for myself. My soul quickly related and connected with the other souls of the beings in the spiral and only then I felt I could pray. I had a definite feeling that I was praying with the other souls, but also for those souls at the same time. I asked God to heal us of our vices, defects, imperfections, diseases, illnesses, traumas, as He agrees.

This unity of my soul with the other souls of the human beings in this spiral has generated, as God had granted, the living experience in my heart that God is in all these souls, that in reality this inner search of all these souls, these inner requests, these pure aspirations of all souls were animated by God Himself. These perceptions animated my own soul in a particularly nourishing way, being full of aspiration and gratitude to the One who in reality animated everything that was happening then. Then I noticed several times during the spiral meditation that at the level of ajna chakra on the subtle level I perceived the colour turquoise with shades of green, a quite transparent colour, not at all intense, I could say a colour that awakened in me states of serenity and peace, I would even call it a peaceful serene colour.

Further during this yang spiral meditation I firmly and steadfastly turned my attention and my whole being towards God the Father, this approach having that clear and continuous background of oneness, of “togetherness” with the other souls of beings at this special manifestation. I felt that my heart wanted nothing more than a state of total abandonment, an identifying abandonment with God the Father. Any other request in this moment of meditation, any other desire that I presented to God to fulfil appeared to me to be without consistency, without reality, without life.

Then, shortly afterwards, I felt an even greater abandonment of my being to God the Father, an abandonment that awakened in me a deeply nourishing and moving aspiration towards the mysterious being of God. Then, in an overwhelming, pregnant, shaking and at the same time moving way, I felt the endless immensity of God the Father. I felt that God was offering Himself in Himself, expanding Himself in Himself. In me arose then the definite feeling that I do not exist, but only this godly immensity in continuous ecstasy. I tried to come back and use my mind and heart to intensify this aspirational self-giving to God, but I found that I could not, more precisely that it could not be done. The strong and clear feeling that God was offering Himself in Himself dissolved my limited being and only ananda remained.

At this moment of meditation Grieg made his presence felt and I felt something altogether grandiose, namely Grieg flooded with this godly immensity, that through Grieg the overwhelming godly immensity was manifested for all of us and for each one of us in a distinct way. I was in fact shown the state of perfect channel that Grieg embodies moment by moment. I felt that there was nothing in Grieg’s being that stood in the way of this manifestation of God, as only God wants. After a short time, Grieg’s presence was no longer directly felt, somehow hidden, but what remained was the state of vessel in which I was bathed, dressed, if I can call it that. My being has become, amazingly for me, a stenic structure, with a certain subtle robustness, completely open, self-giving and transparent to God. It was as if the interior of my being was empty and open at the same time to what the godly immensity wants to pour into and through me.

Then I began to feel in an overwhelming way how in this emptiness, in this inner emptiness and transparency, waves were pouring down from the top of my head, from this immensity, godly. I felt in those moments that my being spontaneously did not accumulate, did not gather or ask for itself what was pouring down from above into my inner universe. Then followed again a merging with God, that condition of non-existence of myself, but of existence of God alone. At the stage of the manifestation of the state of gratitude towards God, at the moment when Grieg said: “I thank You, Heavenly Father, with love, gratitude and humility”, I felt that my words of gratitude towards God were spoken in an ineffable way by and in God the Father and that those states of love, of humility were emanated in and by God the Father, an experience that flooded my being with continuous tears before this endless greatness of God. In the quiet awareness of the outpouring of God’s grace, after the spiral meditation itself, I continued to remain as centred and peaceful as possible within and I began to feel something mysterious and powerful flowing into my being unceasingly, without any expectation on my part, which only God had consented to offer me. For me in the Special Healing Event time appeared to me as a Godly eternity and not a specific temporal duration.